Click here for additional resources and maps on Corridor K in North Carolina. 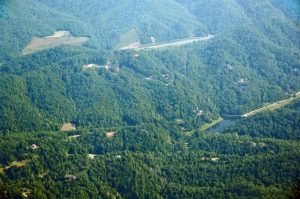 In 2008, the North Carolina Department of Transportation announced its plans to drill a 2,870-foot-long tunnel almost 500 feet beneath Stecoah Gap, a saddle in the Cheoah Mountains of western North Carolina. Sitting at 3,165 feet, Stecoah Gap is crossed by a two-lane state highway. The tunnel is part of a project that aims to build a new, four-lane highway  Corridor K.

The stretch of Corridor K planned through Stecoah Gap is one of the “incomplete” segments of the Appalachian Regional Commission’s 1965 plan to build  modern highways throughout Appalachia. The DOT’s 2008 Draft Environmental Impact Statement made its intentions clear: a new, four-lane highway that climbs the Cheoah Mountains, travels under them through a tunnel drilled into the headwaters of Sweetwater Creek, and goes back down Stecoah Creek to the historic Stecoah community.

At WaysSouth, we believe the ARC’s 45-year-old highway system plan is now outdated. Originally conceptualized to facilitate commerce among key southeastern cities and ports, the plan has since been rendered obsolete by the completion of the Eisenhower Interstate System, not to mention a world increasingly interconnected by technology. Efficient transportation is readily accomplished between Chattanooga and Asheville via I-40, to Atlanta by I-75, and to eastern port cities via I-20 and I-16 with no appreciable difference in time based on this proposed roadway.

Further, the Corridor K proposal poses a tremendous threat to the region’s environmental and cultural treasures. It is an excessively expensive project that will provide little or no benefitcertainly any benefits would not outweigh its costs. At WaysSouth, we recognize that there are local transportation issues that need to be addressed, but we believe the areas legitimate transportation needs can be better fulfilled by a program of targeted upgrades to the existing two-lane, scenic highway network.

WaysSouth organized written and oral comments in response to the public comment periods on these plans, initiated by the U.S. Army Corps of Engineers and the NCDOT. Our efforts resulted in 20 of 22 speakers sharing our position at a public hearing in late 2009. Around the same time, the Corps ordered the NCDOT to consider upgrades to the existing two-lane road network — the option WaysSouth has been advocating for  years. As proof that our advocacy matters, the Corps specifically cited “numerous comments received in response to the public notice” as a factor in its order.

WaysSouth has also engaged in general community organizing and direct advocacy with elected officials and agency staff on the issues of Corridor K in North Carolina.