“With the Stop I-3 Campaign, WaysSouth helped prevent irreversible damage to our mountain ecosystem, water and air quality, endangered species, local economies, and the natural beauty of our region.”

WaysSouth’s origins in 2005 lay in an organized citizen effort to prevent the construction of Interstate 3, proposed to run from Savannah, Georgia, through Augusta, Georgia, to Knoxville.

The proposed Interstate 3 would cut through the mountains of Northeast Georgia, Western North Carolina, and Eastern Tennessee, threatening four National Forests and the Great Smoky Mountains National Park. The damage to the mountain ecosystem, water and air quality, endangered species, local economies, and the beauty of the region would be irreversible. Further, a shorter interstate route from Savannah to Knoxville currently exists (I-95 to I-26 to I-40). 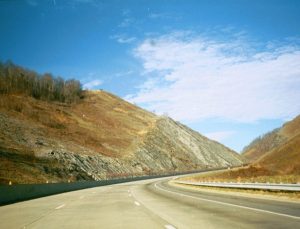 Dozens of organizations within the region that would be affected by I-3 have endorsed and joined our efforts.

In 2010, the Federal Highway Administration (FHWA) issued a request for proposals to conduct the I-3 study authorized in 2005. The FHWA entered into a contract for the study, which took approximately one year to fulfill. WaysSouth earned a seat as the only nongovernmental organization on the expert working group monitoring the contractor throughout the study. (Read more about the study contract.)

You made a difference!

After seven years, the legislatively required feasibility study of I-3 is completed, has been presented to Congress, and is now available for all to read.

The study finds “fatal flaws” in all of the potential routes through the Southern Appalachians and eliminates all routes as infeasible except for one. That route travels west of Augusta, east of Athens and Gainesville, to Dahlonega and from there into Tennessee. Estimated costs range from $701 million to connect highways with basic two lane roads, to $4.845 billion for an interstate level highway on this route.

The study acknowledges the strong public opposition to building an additional major highway through the Southern Appalachians. Ways South supporters can be proud of their success in stopping this bad idea. WaysSouth would like to thank our supporters for their contributions and advocacy that helped us Stop I-3.

The FHWA reports that there has been no significant feedback from Capitol Hill after the study final report was delivered and that they have closed the budget account. The unspent authorization remains at the US Treasury but cannot be used for anything other than the I-3 study thus making it essentially terminated.

About the Federal Highway Administration Study on I-3

Please visit our Maps and Resources page for more information about Interstate 3 and its potential impact on the Southern Appalachians.

View the Stop I-3 photo gallery.